Hello everyone, we have had some more NEW faces last month (which we LOVE) and have really enjoyed looking at your pages & talent. So many FLOWER-POWER-ART --- awesome!
A big Thank you to all the passengers of Art Journal Journey Monthly Challenges !

Take a gander at all the enchanting creations from July HERE !


She made  this wonderful and inspiring example for us!
And Valerie wrote this little introduction:

Frida Kahlo de Rivera, was born Magdalena Carmen Frieda Kahlo y Calderón on July 6, 1907 and died on
July 13, 1954. She was a painter who is best known for her very moving self-portraits, which graphically depict her pain, suffering and joy.Kahlo's life began and ended in Mexico City, in her home known as the Blue House.Her work has been celebrated in Mexico as emblematic of national tradition and by feminists for its uncompromising depiction of the female experience and form.Mexican and Amerindian cultural tradition are important in her work, which has been sometimes characterized as naive or folk art. Her work has also been described as surrealist, although Frida said of herself, 'I do not paint dreams or nightmares,
I paint my own reality'. 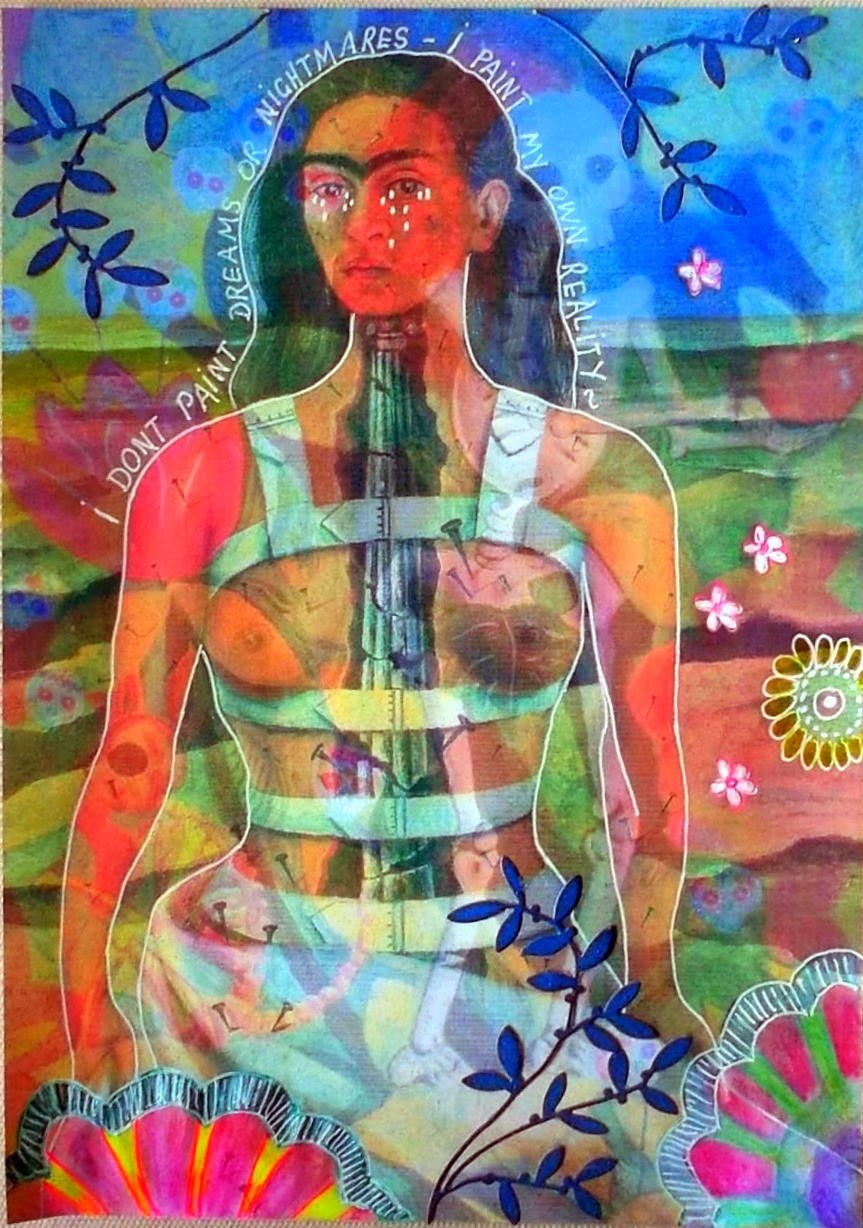 She had a volatile marriage with the famous Mexican artist Diego Rivera. She suffered lifelong health problems, many caused by a traffic accident she survived as a teenager. Recovering from her injuries isolated her from other people, and this isolation influenced her works, many of which are self-portraits of one sort or another. She suggested, "I paint myself because I am so often alone and because I am the subject I know best." She also stated, "I was born a bitch. I was born a painter."
She contracted polio at age six, which left her right leg thinner than the left; she disguised this later in life by wearing long, colorful skirts. 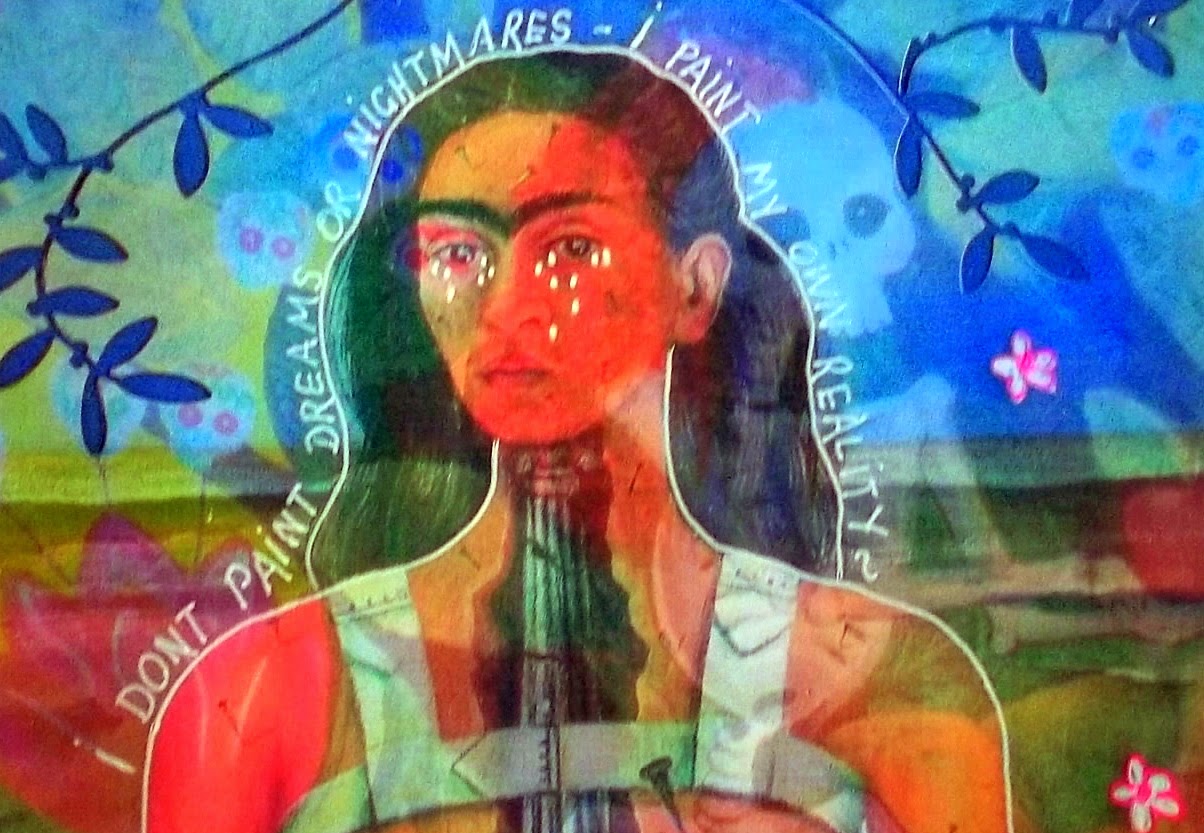 On September 17, 1925, she was riding in a bus that collided with a trolley car. She suffered serious injuries as a result of the accident, including a broken spinal column, a broken collarbone, broken ribs, a broken pelvis, eleven fractures in her right leg, a crushed and dislocated right foot, and a dislocated shoulder. Also, an iron handrail pierced her abdomen and her womb.
The accident left her in a great deal of pain, and she spent three months recovering in a full body cast. Although she recovered from her injuries and eventually regained her ability to walk, she had relapses of extreme pain for the remainder of her life. The pain was intense and often left her confined to a hospital or bedridden for months at a time. She had as many as 35 operations as a result of the accident, mainly on her back, her right leg, and her right foot. The medical complications and permanent damage also prevented her from having a child; though she conceived three times, all of her pregnancies had to be terminated. Her injuries and the pain of not being able to have a child is shown in many of her wonderful paintings. 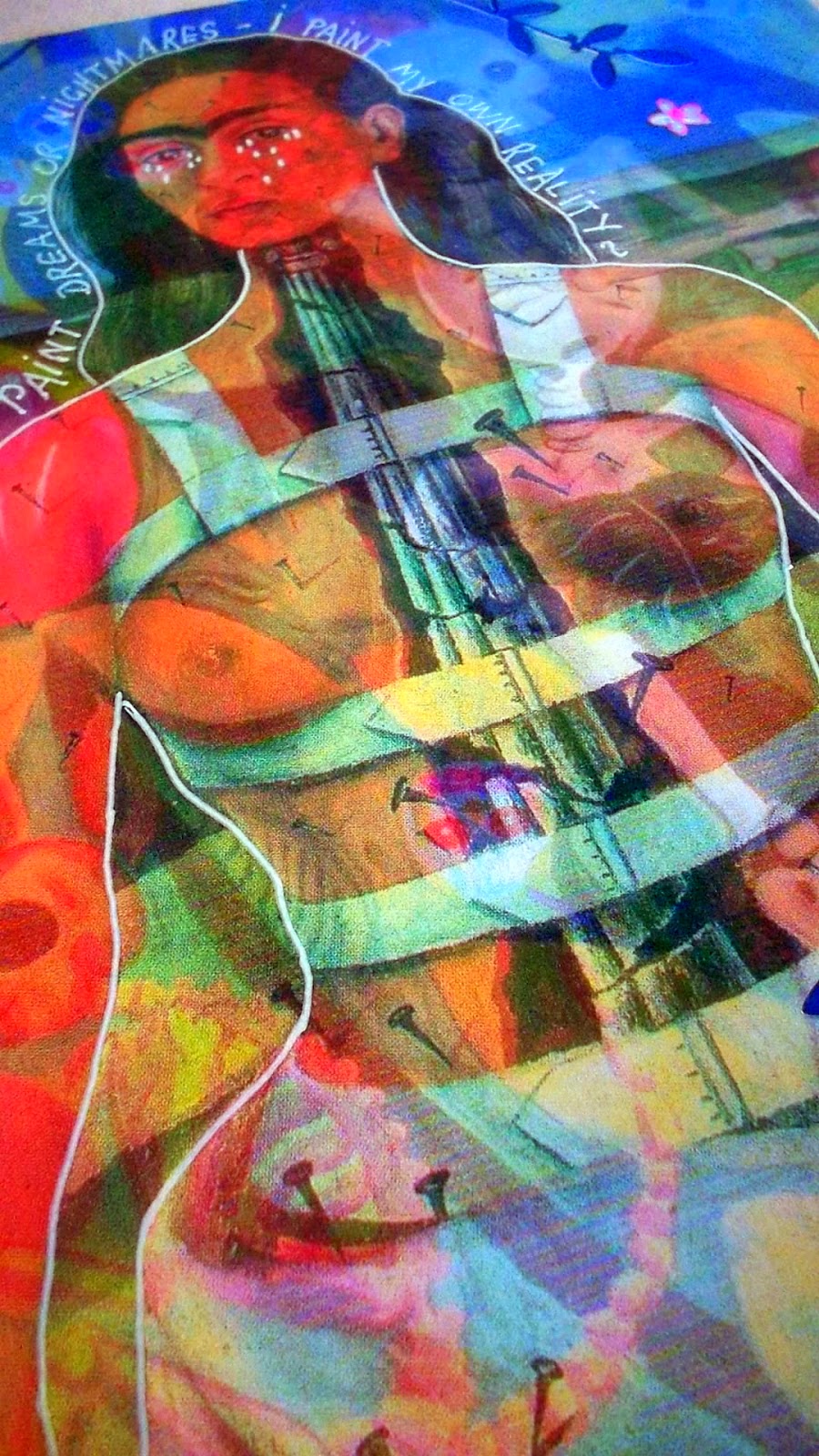 For my piece today I have superimposed her painting of 'The broken column' over a postcard of Mexican 'Dia de Los muertos' folk-art. I then added colours with oil-pastels and gel-pens. I used a white highlighter to doodle flowers and the outline, and added one of her quotes. I chose this painting to start with as it epitomises for me how she saw herself, and how her suffering shaped her art, against a background of the Mexico she loved. One of my fave and much read books is her 'Painted Diary',  which I would warmly recommend to all who have not read it.

We have put together some ♥♥♥FRIDA♥♥♥INSPIRATION for you  -  look HERE to get your creative juices flowing.
Have fun and we really hope to see so many enthusiastic artists with their Art Journal entries here as in July! Please have consideration and notice that greeting cards or ATCS, tags  and such rather smaller artwork will not be  accepted for our event and we have to delite the links - only larger artwork in an Art Journal or on Canvas or loose pages -
larger than DIN A 6 (105x145mm=4,1 x 5,8 inches) will be accepted.

Below you find  our new August - Gallery - Button for this month's event - so that you simply can just click here in the course of August to see all entries at one glance.

Posted by froebelsternchen at 4:00 AM

We are thrilled you visited and always look forward to your journal art. 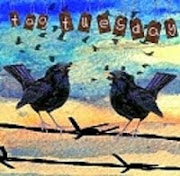